The Intersection of Plants and People

Although the Northern Hemisphere’s winter is still blasting away, harbingers of Spring and Summer are beginning to arrive in the mail: Iris catalogues! Soft snow outlining the rooftops and dormant trees is pretty, but the popping colors of irises are a welcome sight for those weary of winter’s neutral tones.

During the slow defrost, catch PlantXing’s sneak peek of new iris introductions by hybridizers around the world: 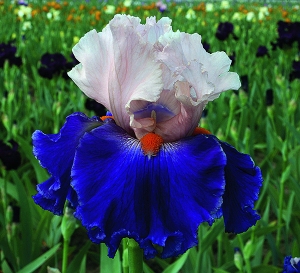 Description: An unusual amoena with pink-toned lavender standards on large, rounded, royal blue-violet falls. A mesmerizing, bright orange beard is set off by “white eyelashes” and a light wire on the periphery. Blooms in the mid-to-late season for Tall Beardeds. (Height: 102 cm = 40 in)

Reason for Introduction: “Over the course of several years, seedlings are observed in the fields for color, bloom size, vigor, and other qualities that make an iris desirable in the garden. We are often seeking a unique color combination, or a strong classic appearance with a truly superior growing habit, or both! The pale lavender of the standards of ‘Dating A Royal’ put the flower in the amoena category, and combine with the colors of the beards and falls so smoothly, it just had to be introduced. It also has a high bud count, with 8 to 9 buds per plant.”

Reason for Introduction: “Its shape is not perfect but I think the tone combination is new and promising. In a few years it will be maybe possible to obtain a blue and green iris with orange beards. It may sound ludicrous, but I am certain that such a variety would be easy to integrate in mixed borders. Two years ago when the famous British photographer Clive Nichols visited us he stopped dead in front of this iris when it was only in the trial stage.”

Searching for a true pink amoena (white upright petals with pink “falls” or cascading petals), Blyth began seeking the elusive color combination in 1962. Since then, Blyth has made crosses every year in the attempt for such an amoena, producing hundreds of thousands of seedlings, many of which were tossed.

“Finally we are getting there and I think in two-to-three seasons there will be several really good pink amoenas available,” Blyth wrote via email.

Though ‘Sherbet Bomb’ and ‘October Dreaming’ are not true amoenas because of faint coloring in the “standards” or upright petals, they have been named for introduction this year because of their excellent form, beautiful branching and strong growth.

“Both will not actually be catalogued for two more seasons but are already keenly anticipated by people who have seen them,” explains Blyth.

Description: ‘Embrace’ is an example of a plicata, a type of iris pattern that features “stitching” or speckles along the edges of the petals.

Reason for Introduction: According to Blyth, ‘Embrace was chosen for introduction because “I am interested in Plicatas that appear from crosses that do not always exhibit any plicata traits, some for many generations. I think this is where new plicata patterns will come from.”

Description: “Beige-pink standards contrast with flaring lobelia blue falls, which pale at the margins, adding interest. The beards are a mix of violet blue, lavender white, and, predominantly, tan orange. Plenty of ruffled and waved flowers on well-branched stalks make it a good garden subject.” Midseason Bloom. (Height: 95 cm = 37 in)

Reason for Introduction: “I kept hoping to get a “tangerine factor” seedling from the cross, and finally my wish was granted.  I’ve been using it in further breeding, and it is a good breeder as well as a good garden plant.”

Description: This cross was made at Keith Keppel Iris Garden in Salem, Oregon and grown by Sergey Loktev in Moscow, Russia. Named after Loktev’s friend, American author and Russian Literature scholar John Glad, this Tall Bearded variety features lilac, bordeaux light violet shoulders, and a milky cream haft pattern. Beards are yellow in the throat, fading to a light lilac at the end. The petals are ruffled and laced. (Height: 71 cm = 28 in)

Reason for Introduction: “It was chosen for introduction because of its perfect (as I consider it) flower form, lace, and different shoulder color. What’s more, is it’s a very good grower here in our climate.”

Description: “It is another step forward in broken-color patterning that is a complete departure from the traditional Ensminger blood lines. Patterning ranges from very subtle to bold. Stalks are tall with show branching and lots of buds.  Growth is strong with many stalks per clump.”

Reason for Introduction: “It was introduced because of the strong growth and tall, well-branched and budded stalks.  Most of the previous, traditional broken-color Tall Beardeds have been deficient in those traits.”

This seedling by Paul Black has a combination of variegated bloom and foliage in one plant. Image courtesy of Paul Black.

Paul Black has shared another treat with us, an unheard-of Tall Bearded cross that expresses both variegated coloring in its flower, and variegated foliage! Seedling V24A’s parents are ‘Variegated Wonder’ and ‘Die Laughing’ (shown in the previous listing).  Both parents are 2014 introductions, while the seedling has not yet been introduced.

“It is quite a hybridizing feat to get variegated foliage and flower in the same plant,” Black explains via email. “Right fall of flower is broken off from my trying to pry it open before it was ready – ‘Inquiring minds want to know.'”

The seedling has taken on the foliage of its parent, ‘Variegated Wonder,’ which Black says is a sport of ‘Wonders Never Cease’ and “‘has the same wonderful flower as ‘Wonders Never Cease.'” A ‘sport’ is unusual in itself. A sport is a part of a plant that grows with markedly different traits from the rest of the main part of the plant, expressing a genetic mutation. 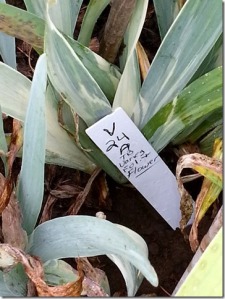 Black was able to produce more rarities, including a Standard Dwarf Bearded Iris with a variegated bloom. Three of its siblings had variegated foliage, also seldom seen in this size category of iris.

Reason for Introduction: “As the inventor of the Tetra-Sibtosa group of iris hybrids I am always keen to improve the range of colors in this group. The magenta color in this case was the main reason to introduce it. Other aspects were the size and width of the flowers and the fact that ‘Magenta Sibtosa’ is quite vigorous.”

Description: A rare, dark blue 2/2-Tetra-Sibtosa hybrid. ‘Wave Encore’ makes a good parent, as it is a vigorous, fertile hybrid. This cultivar is well-formed, with two side branches. (Height: 80 cm = 32 in)

Reason for Introduction: “‘Wave Encore’ is a beautiful flower, too, but it was mainly introduced as a hybridizer’s tool. Unlike ‘Magenta Sibtosa,’ this variety is fully fertile and can be used for crosses with tetraploid Sibiricas and tetraploid Setosa varieties.”

Description: Named for the serrated, feathery tops of its standards, ‘Birds of a Feather’ has an Early-Midseason bloom.. This striking Tall Bearded variety is the result of a cross between ‘Millennium Sunrise’ (Schreiner, 2000) and ‘Alpenview’ (Keppel, 2002). (Height: 86 cm = 34 in)

Reason for Introduction: “It was selected for its unique and intriguing color combinations of blue, lavender, green and gold with blue style arms edged in gold. Prior to opening, the buds are a bright chartreuse. The beards are white with orange throats.”

Offered for sale through the Trails End Iris Gardens in Ontario, Canada. 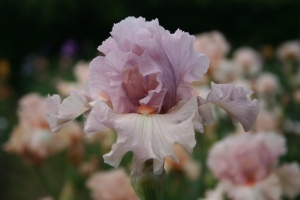 ‘Albachiara’ by Lorena Montanari. Photo courtesy of the hybridizer.

Description: This Tall Bearded’s name translates from the Italian to ‘light of the sunrise.’ It blooms Midseason-Late, with standards that are a lilac-rose flushed violet. Elegant, ruffled falls are orchid-rose with creamy centers. A vigorous grower, ‘Albachiara’ bears many stalks with spectacular clumps of flowers. (Height: 94 cm = 37 in)

Reason for Introduction: “I live on the hills of a sea town, and this color reminds me of the sunrise light on the sea. It will be introduced by Mid-America Garden.” 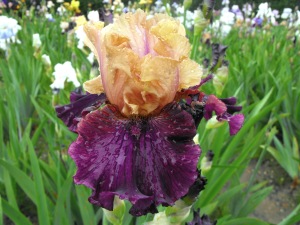 Reason for Introduction: Seidl explains that the iris has proven to be a good, tough grower with plentiful blooms in his four-season climate. Seidl lives in the eastern part of the Czech Republic, in Hlučín, close to the Polish border.

This is how many iris hybridizers start out — as amateurs toiling in their home gardens, cross breeding favorite varieties in the hopes of discovering a new variety all their own. Tohru Mamiya, a member of the Japanese Iris Society, shared with PlantXing the following information about three of his Tall Bearded seedlings. Though they remain unnamed and need a few years to increase stock for possible introduction, Mamiya’s work may inspire others to give hybridizing a try.

Mamiya’s garden is in central Japan’s Kakamigahara City, just north of Nagoya. Readers interested in finding out more about his irises may contact him at t.mamiya2456@qc.commufa.jp

Seedling 1 is a cross between ‘Irish Cream’ and ‘Eye for Style.’ Image courtesy of Tohru Mamiya.

Description: “Cornflower-blue self has fully inherited its parents’ character. I noticed its form, the so called bubble-ruffed flower, and I had never seen that in my seedling field.” Midseason Bloom. (Height: 85 cm = 34 in)

Description: “This blue black self has remarkably mustard beards. I like its round form and breeding potential.” Midseason Bloom. (Height: 90 cm = 35 in)

Seedling 3 by Tohru Mamiya. Image courtesy of the iris breeder.

Description: “Light yellow standards and blue falls with a yellow band. This flower has great parents, so I believe in its potential.” Midseason Bloom. (Height: 85 cm = 34 in)

To learn more about iris breeding, see “How to Cross Bearded Irises.”